Full disclosure here, but if you haven’t noticed you’re on a Leak Buster site. That being said, we’ll be able to explain to you clearly what the differences are between these two pieces of database analysis software. Leak Buster is an ad-on item in Holdem manager 1 and 2. It’s also a stand-alone application that can work with Poker Tracker 3 and 4. Leak Buster retails for $59.99+, and Leak Tracker is a free add-in item for Poker Tracker 4.

Poker Tracker created a watered-down version of the popular add-on products that are available in Holdem Manager (not just Leak Buster) as an attempt to compete with Holdem Manager 2’s rising sales. The strategy didn’t end up working, and they eventually merged with Holdem Manager in Q3 of 2014. Poker Tracker representatives have said directly to our team, we never intended on making a Leak Buster. We just wanted to add some value, and there’s no way we can compete with the quality of strategy content in Leak Buster. So there was never any intention on their part to do so.

Leak Tracker copied 2 of the 10 steps in Leak Buster and adapted it into a much simpler format. Leak Tracker will look at your current stats, and compare them against what they consider normal winning ranges. They look at a specific set of stats and then also do this by position. Leak Buster does this same thing, but it also allows you to see how winrates change when you go lower or above the recommended Leak Buster stat ranges as you see in the example to your right.

Leak Buster is much more than stat ranges though. With one click you’ll be able to see tons of specific leaks related to bet sizing, post-flop play, and pre-flop decision making. This is where Leak Tracker and Leak Buster separate completely, as Leak Tracker has no post-flop analysis.

There’s really no much comparison, but Leak Tracker will provide you with some basic information about some of your stats, but if you’re looking for what leaks are most important to work on first, how to correct your leaks and any kind of post-flop analysis, you’ll want to get Leak Buster. Below is a table comparison of some of the key differences. 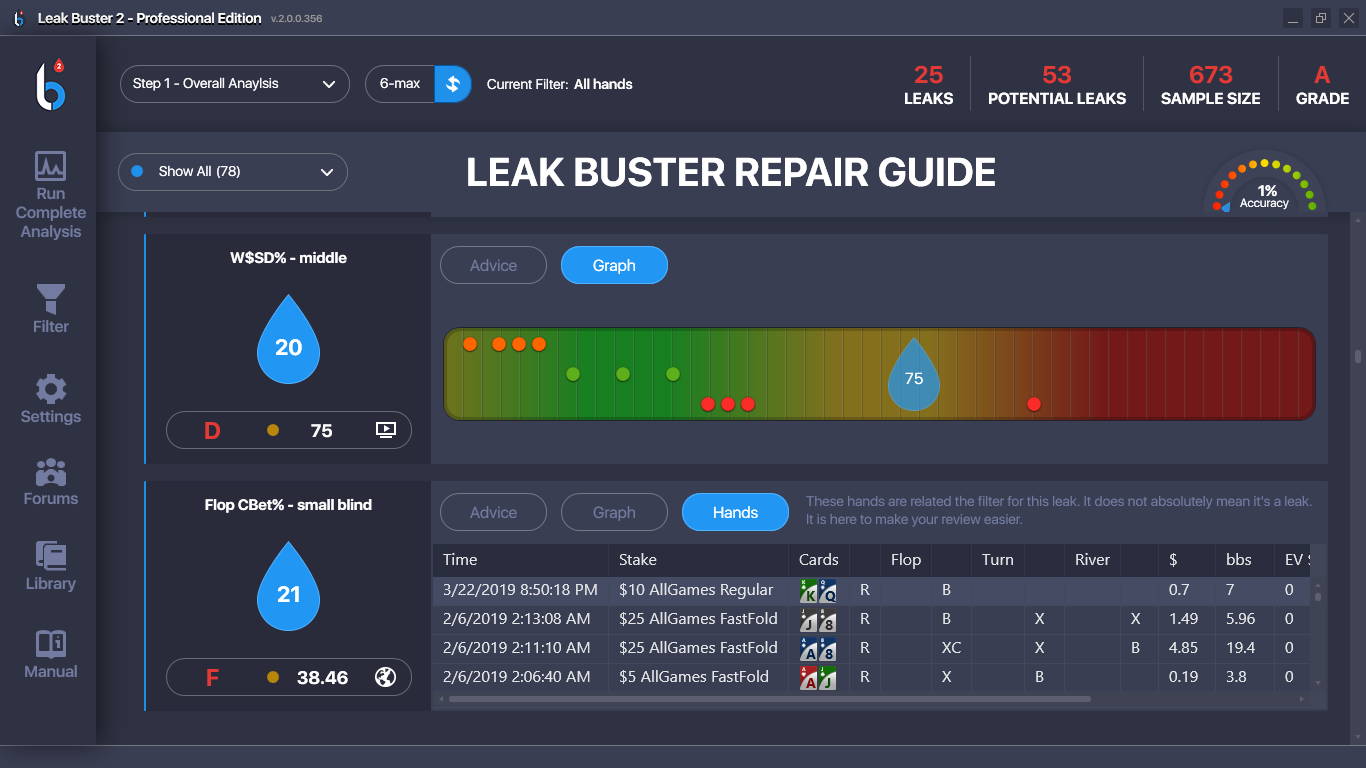 Find your poker leaks with our poker analysis software in minutes

Simplify your database analysis – Leak Buster runs over 55+ custom filters, and checks for over 465 potential weak areas of your game. No need to spend countless hours setting up filters, and running each of them, one at a time. Leak Buster does all the work in minutes.

Zero in on trouble hands. Leak Buster is more than stat analysis; it’s a full analysis of your game. It will highlight poor post flop play, and allow you to replay and analyze each of these hands easily and efficiently.

Leak Buster adjusts its advice and statistical ranges based on the stakes you’re playing. So micro stake players won’t have the same ranges and feedback, as more advanced poker players would have.

A complete learning library, with over 90+ professional videos on several of the most important poker topics. Get recommended videos, quizzes, and articles based on what Leak Buster thinks you need to work on the most. Even if Leak Buster doesn’t have a video listed for you, you can browse the complete learning library at any time at your own pace.

Leak Buster will monitor your trouble hands. Hands that give most learning poker players the most difficulty, and provide spot on advice for how to make more profitable adjustments based on your current play.

Pro level advice on your play from every position at the table. Walk through each and every spot, and learn how you can become more profitable by adjusting some aspects of your pre-flop and post flop poker game.

Get Started
Menu
We use cookies to ensure that we give you the best experience on our website. If you continue to use this site we will assume that you are happy with it.Fine by mePrivacy policy